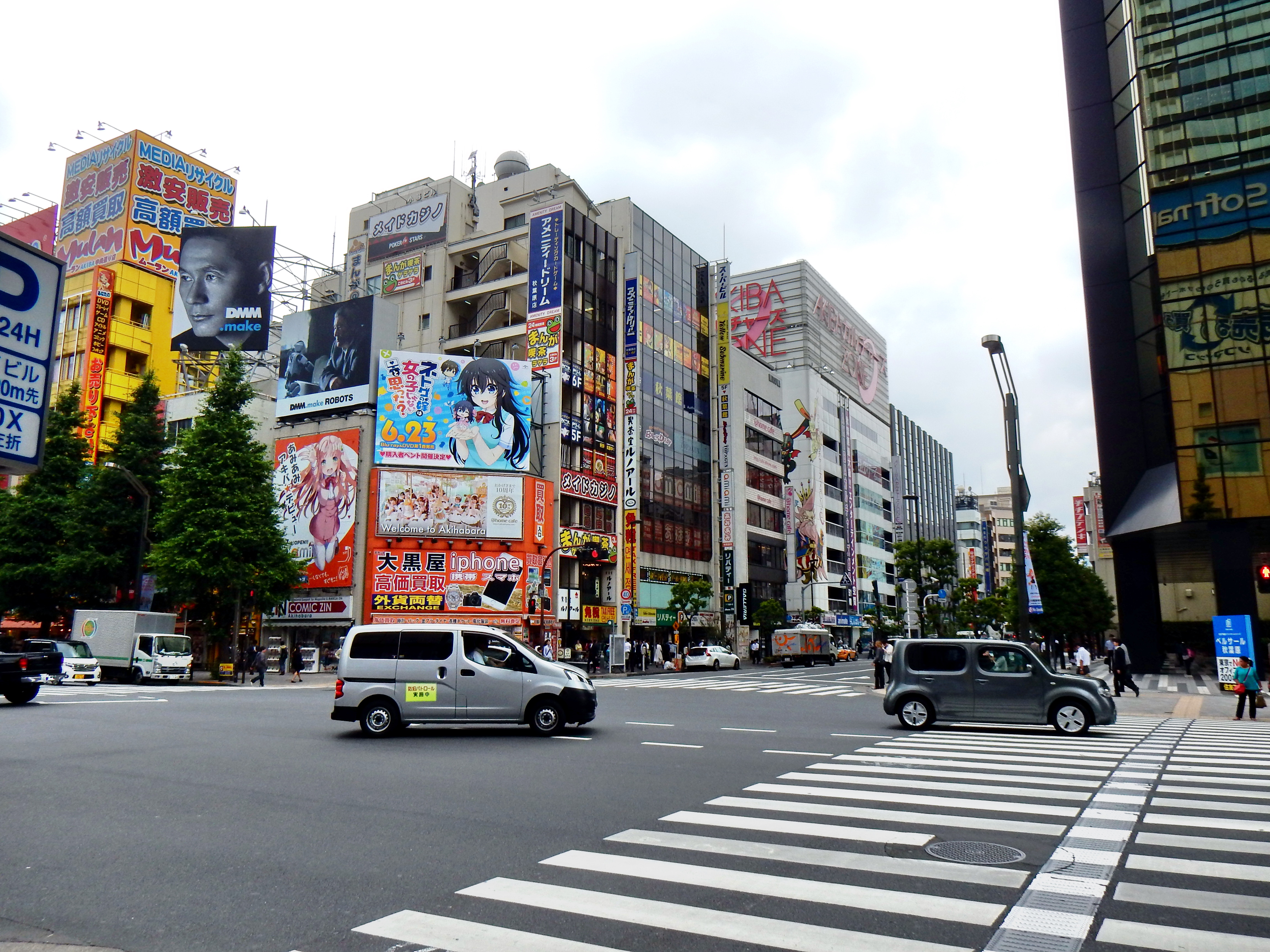 This is my first entry about my visit to Tokyo, Japan with my brother and parents last summer. Tokyo is a massive city and was pretty overwhelming at times, so it was nice and possibly a necessity to view the city as a collection of distinct neighborhoods as we made our plans each day. So, I’m going to post about one neighborhood at a time as I recap our time in Tokyo to match.

The first neighborhood I’m going to talk about is Akihabara. Our hotel was pretty close, so we decided to walk over to Akihabara instead of taking the metro. The walk over was interesting, but lacked a distinct feeling or panache. Here is one of my favorite pictures from our walk to Akihabara:

While the walk over to Akihabara lacked a certain flare, Akihabara itself possessed no such problem. When we first sighted the buildings of Akihabara, it was abundantly clear that we had arrived in the neighborhood. No signage was present or necessary to tell us we were entering the heart of Akihabara. The sudden appearance of anime and video game characters all over the buildings made it obvious enough.

Walking around Akihabara was fun in and of itself, but what had to stop when we found the bizarre claw store. In an odd way, a big store full of claw machines right off the street fit in Akihabara. We saw many locals hop in the claw machine store as well, but the store likely counts on tourists to stop by. Sure, claw machines are all over the place in the U.S., but this was literally all this storefront had going on.

As we ventured empty-handed back onto the street we were laughing at how silly the claw machine really is. We thought the claw store was weird, but perhaps not as strange as the remainder of our time in the neighborhood. As we turned the corner, we walked past a store front in which we could only see spoils of wire. Was this a hardware store? I don’t think so; we peered in the windows and literally saw a wide array of spoils of various gauge wires. How does this wire shop stay in business?

Next up on on our walk was running into a wide variety of vintage video games. It was pretty funny to see the sidewalk full of baskets of old Nintendo games. Unfortunately, I wasn’t sure if the games would be compatible with the U.S. versions of our Nintendo systems. Also, I think we got rid of our NES and Gameboy about 10-15 years ago.

Well, we didn’t really buy anything in Akihabara. It was entertaining enough just to see what you could possibly buy there. Speaking of buying random stuff, we checked out a bargain department store named Don Quijote shortly after. As I recall, the building was at least 7 floors of chaotic rows of everything imaginable. Ok, maybe not everything imaginable, but the haphazard layout of goods made it seem like a truly bizarre collection of things. Hello Kitty cameras sat next to blenders, which sat next to trucker hats for Knoxville, TN. Don Quijote is a great place to buy cheap souvenirs, however, we were mostly confused who bought most of this stuff. I’m probably forgetting some of the most unusual things available, but the eclectic nature of the store was overwhelmingly weird.

Before wrapping up this entry, I wanted to point out one more place: The @home cafe. We did not go to the @home cafe, but the idea is apparently that the waitresses dress up as maids (see the picture below, the stereotypical black and white French maid costume). I’m not exactly sure how it works but it sounds like the ‘maids’ are particularly subservient and attempt to cater to the fantasy of customers. I certainly don’t mean to lay any judgment or anything, but the idea of the maid cafe is a little uncomfortable to me. It may have ended up being a fun experience, but I think I mostly would have felt bad or embarrassed to have been there. Maybe it was just extensive marketing out on the streets of Akihabara, but the maid cafes seemed pretty popular; so, maybe we really missed out though.

Well, that’s a wrap on the Akihabara district of Tokyo. We had a really good time walking around and this area really felt like Tokyo to me. I had never been to Tokyo, but this area displayed a lot of what I thought about when I thought about Tokyo prior to going. Perhaps this just means I had a stereotypical view of Tokyo, which is too bad or a little shameful. However, there is a fairly sizable culture or subculture within Tokyo that Akihabara showcases very well. As we visited several other neighborhoods later in our visit, the complexity of Tokyo and Japanese culture were greatly magnified as well.