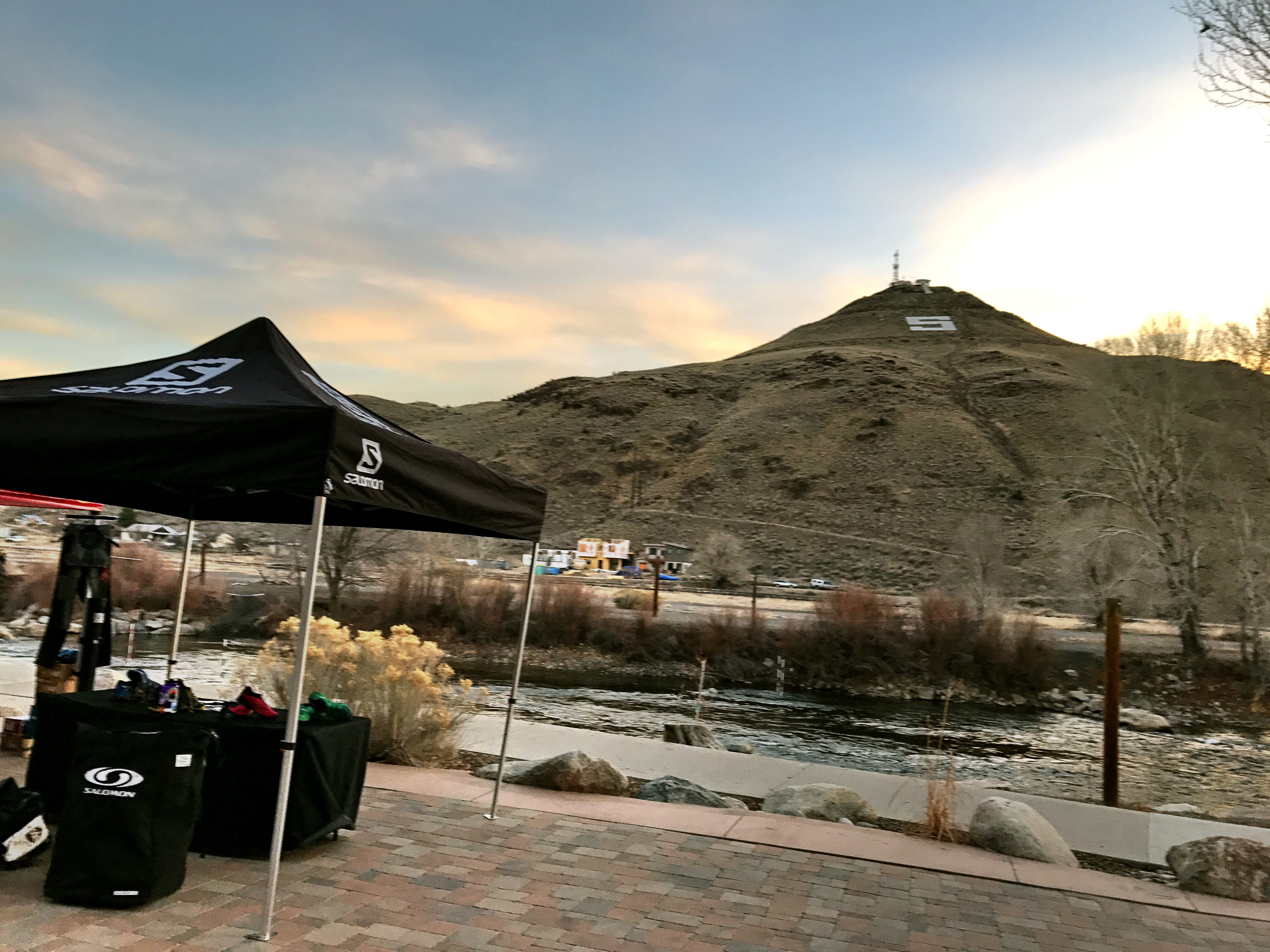 The Run Through Marathon is an awesome early season trail race in the mountains of Salida, CO.. Salida (population ~5,500) is a beautiful town about a 2.5-3hr drive from Denver. The town sits at 7,083ft and offers fantastic views of the mighty mountains of the Sawatch Range. In particular, Salida possesses sweeping views of the Collegiate 14ers (Mt. Princeton, Mt. Harvard, Mt. Columbia, Mt. Yale, Mt. Oxford, etc.). Salida is a cool little town with great access to a wealth of outdoor recreation, including the sweet network of trails the Run Through Time Marathon uses.

Before jumping into a more detailed and personal account of the Run Through Time Marathon; here are some quick thoughts:

I highly recommend this race! It is difficult to find a great trail running race in March, but this race hits the mark. Also, starting off the year with a March marathon is a great way to get yourself or keep yourself motivated through the Winter. Of course, the weather in Colorado hasn’t felt very wintry for the most part this year anyway.

This race was hard! The Run Through Time Marathon was my first marathon since finishing the Never Summer 100k in July last year. I enjoyed some time off from races and I think it was very necessary for me as well. That said, I am happy to be back on the board! When I ran Run Through Time last year, it was my first trail marathon and I didn’t really know what to expect. This year, I had my prior year finish time as a frame of reference and I sought out to beat that time this year.

Despite not feeling as well-trained this year, I still decided this would be my goal shortly into the race. I had bronchitis at the end of February and lost a few weeks of training. Also, I haven’t been hitting the gym like last year for strength training. So, I don’t know that I had any real reason to believe I’d do better than last year. In retrospect, the only reason that seems valid is that I had more confidence after a great year of trail running last year. For the first half of the race, whatever blend of reasons (justified or not) rhymed quite well. The race was going great and I attacked the hills with enthusiasm.

About half way through the race I was around 11 minutes ahead of my time from the prior year! Unfortunately, this was a full marathon though and the second half turned into another story. Shortly after the mile 14 aid station, we started on the Salsa Trail which was a very welcome change to the course this year! Last year, the course turned on itself and asked runners to reverse the road section that was just completed. Running on some single-track instead was a lot more fun and interesting. The one downside is that you don’t run into other racers this way and I never saw the race leaders with this change. While I was relieved to not have to repeat the road, I found my energy dwindling slightly from mile 14-16. Was the course more difficult with the change? Well, I’m not sure honestly; however, my mile 15 split was almost 3 minutes slower this year, so maybe (Check out split comparison chart at the bottom of my post for more detail).

Overall, I really didn’t look at my watch during the race though and I expected to have some ups and downs; so, I was still feeling great! As is typically the case, my lead on the ghost of last year’s time drifted away discretely. I didn’t go into the race with any real strategy of time splits or anything, so having a slower mile here or there never impacted my mindset. I had my watch set to display the total time elapsed in the race and I knew I was ahead of schedule and doing well.

My energy level recovered sporadically for the next several miles before surging out of me around mile 20. I remembered hearing one of the mile 14.3 aid station volunteers imploring us to stock up since the next aid station was ‘about seven miles away’. So, I drained the rest of my Tailwind at about mile 20. I was getting hot and a little dehydrated and was planning on more water or Tailwind in about a mile. Well, it turned out the aid station was closer to mile 23 and I struggled on those extra few miles. While, the volunteer was incorrect; this error is really on me. The race website clearly states the aid positions, I went to the bathroom instead of listening to the pre-race briefing, and also I don’t think runners should ever blame race volunteers! (maybe if they point you completely off course or something?) Race volunteers are awesome and it was my own fault for leaving my second water bottle in my car and not being prepared.

Of course, the lull in my pace and energy also had a lot to do with the course profile. There are some good size climbs from mile 20-23 as I recall. The worst of these climbs for me was the brief section up the sand dune around mile 22. It was pretty demoralizing to sink into the sand on the steep incline when I was already a little down. Realistically, this section wasn’t that long but the lack of solid footing renewed some energy within me. Unfortunately, this renewed energy only yielded anger and loathing rather than productive energy.

Alas, I reached the final aid station and guzzled down some much needed water. I was super excited to see the aid station volunteers and they cheered us on as we left. They probably said something to the effect of “you’re doing great! Almost there!” I knew this was true and I had been trying to focus on what a great feeling it would be to bomb down the final hill to the finish! I fondly remembered cruising down the hill and tracking down many competitors at the race last year.

This year, I was just out of gas though (It took me an extra 9:35 to run miles 24-26 this year, so that is pretty telling. My GPS recorded a little longer on distance this year, so I’m not sure how to compare the final .2 or .5). I don’t think I passed anyone in the final few miles and if I did it wasn’t something I was seeking out. The prior year I remember seeing someone a switchback ahead toward the end and thinking, “I’m coming for ya!” This time around, I was only thinking about trying not to get passed. I felt there was no hope of passing anyone and I just wanted to finish the damn race. I looked over my shoulder a few times and didn’t see anyone, so I relaxed a little bit. About a half mile out (just before the course flattened out to cross the train tracks), I was walking for a few seconds. At the time, I was disappointed for being mentally weak. I was having trouble breathing (as I had for the prior few miles) and I really didn’t think I could push myself harder.

I looked over my shoulder one more time and saw two runners about a quarter mile (or who knows?) closing on me. I turned around, put my head down and cursed them for making me run again. It turned out I could push myself a little bit harder after all. I finished the last section with a nice acceleration and was very relieved to arrive at the finish. I promptly threw my pack on the ground and tried to regain my breath. It would be quite a while before I’d get it back and I felt pretty awful physically post-race.

I had a few friends at the finish who helped me out and got me water, etc. but I was still a little out of it (thanks guys!). Finally, I nonchalantly told my friends that I was going to go throw up. I did and a short time afterward, I could mysteriously breath again. I know I was running hard and pushing myself on the day, but it was an odd experience. I’m not sure if I was feeling the residual effects of having bronchitis a few weeks earlier, but a little of the deep-bronchial cough had returned. Maybe it was just dust from the trail or something though too.

I started to feel a little better after eating some soup and slowly became less dramatic about life. After hanging out at the finish a little bit longer, our group decided to head to Mo Burrito (by Safeway on F street) for a great post-race meal! Mo Burrito was excellent and really hit the spot. My friends ate at Moonlight Pizza and Brew Pub the night before the race and told me it was really good as well.

Well, I didn’t beat my time from last year’s race but I was happy with how the race went overall. I had been feeling behind on training, but this was an encouraging result. I definitely made a few mistakes and probably went out too fast; however, I can honestly say that I went for it. To the extent I went out too fast; I don’t really regret it at all. I’d like to think I’ll run a smarter race next time out, but sometimes things just happen too. I was in position to have a much better finish and I couldn’t close the deal. Also, I had a very good day last year so not beating that time isn’t a big deal by any means. My chip time for the race was 5:00:48:44 (11:28/mi pace) compared to 4:52:46:80 (11:10/mi pace) last year. Oddly enough, I finished in 65th place both years (whatever that means).

P.S. It is a little frightening to think about the Run Rabbit Run 100 being like four times as long going forward, but I guess I really can’t think like that. I just have to stick with the training and work hard up until race day. Going into the Run Through Time Marathon, I was half expecting a wake-up call to get back in gear on training. Instead, I got more of a stay-awake call!