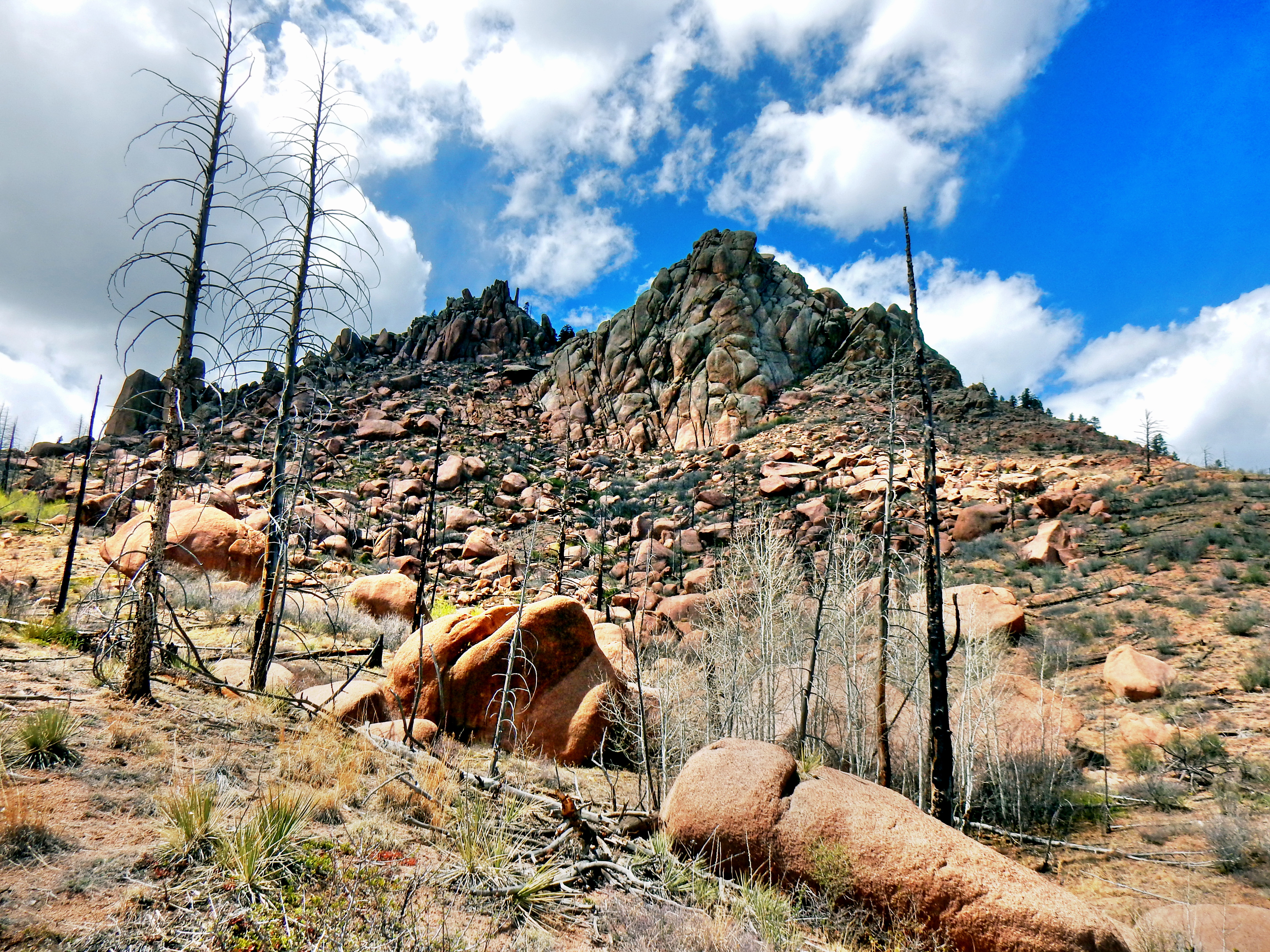 Raleigh Peak may lack the elevation of many other peaks I’ve visited, but stands up very tall in terms of ruggedness and beauty. Raleigh Peak is a relatively isolated peak that is seldom seen other than from Segment 2 of the Colorado Trail given its location. The route to Raleigh Peak also requires off trail bushwacking and dealing with the repeated annoyance of prickly plants, spiky shrubs, and steep rocks. It is as if Raleigh Peak holds a bitter Napoleonic complex which makes it act out to be more memorable. Touché!

It turned out to be a really fun day and I enjoyed Raleigh Peak; but, how did I decide to climb Raleigh Peak in the first place? Well, the reason for today’s visit dates back to last May when I first visited the area. I had recently gotten a book about the Colorado Trail and was excited to explore more of the trail. Since the South Platte River Trailhead is only about an hour drive from Denver it was an obvious place to start. Even though it was a relatively short drive, I figured I might as well summit a mountain with my effort. Simply running out a distance on the CO Trail and arbitrarily turning around just seemed like it would be anticlimactic.

Well, my plans for summiting Raleigh Peak were foiled by private property and my alternate route terminated at the top of the wrong rock pile next door to the summit.

On my prior attempt, I continued on the CO Trail all the way to Raleigh Peak Road and encountered unexpected private property. So, I decided to head off the trail much earlier on my second attempt. For the sake of chronology, I’ll jump back to the start of the hike now.

The hike start out steeply out from the South Platte River Trailhead until reaching an old rock quarry after a mile.

The first thing you see gazing across from the quarry is the brutal destruction of the Buffalo Creek Fire of 1996. The fire was caused by humans which makes Smokey the Bear cry. The landscape is sad to witness, but also possesses a cruel beauty of sorts.

Last year, I followed the Colorado Trail about 6 miles until it crossed Raleigh Peak Road. As I mentioned earlier, that attempt was marred by private property; so, I turned off the CO Trail at mile 3.3 to pick up another old dirt road instead. On the way back down, I found a small, subtle cairn marking a turn-off for the road closer to 2 miles in. Either way, I knew I wanted to get on the road and was on the right track. Also, Raleigh peak is so prominent that I just sort of angled toward it. 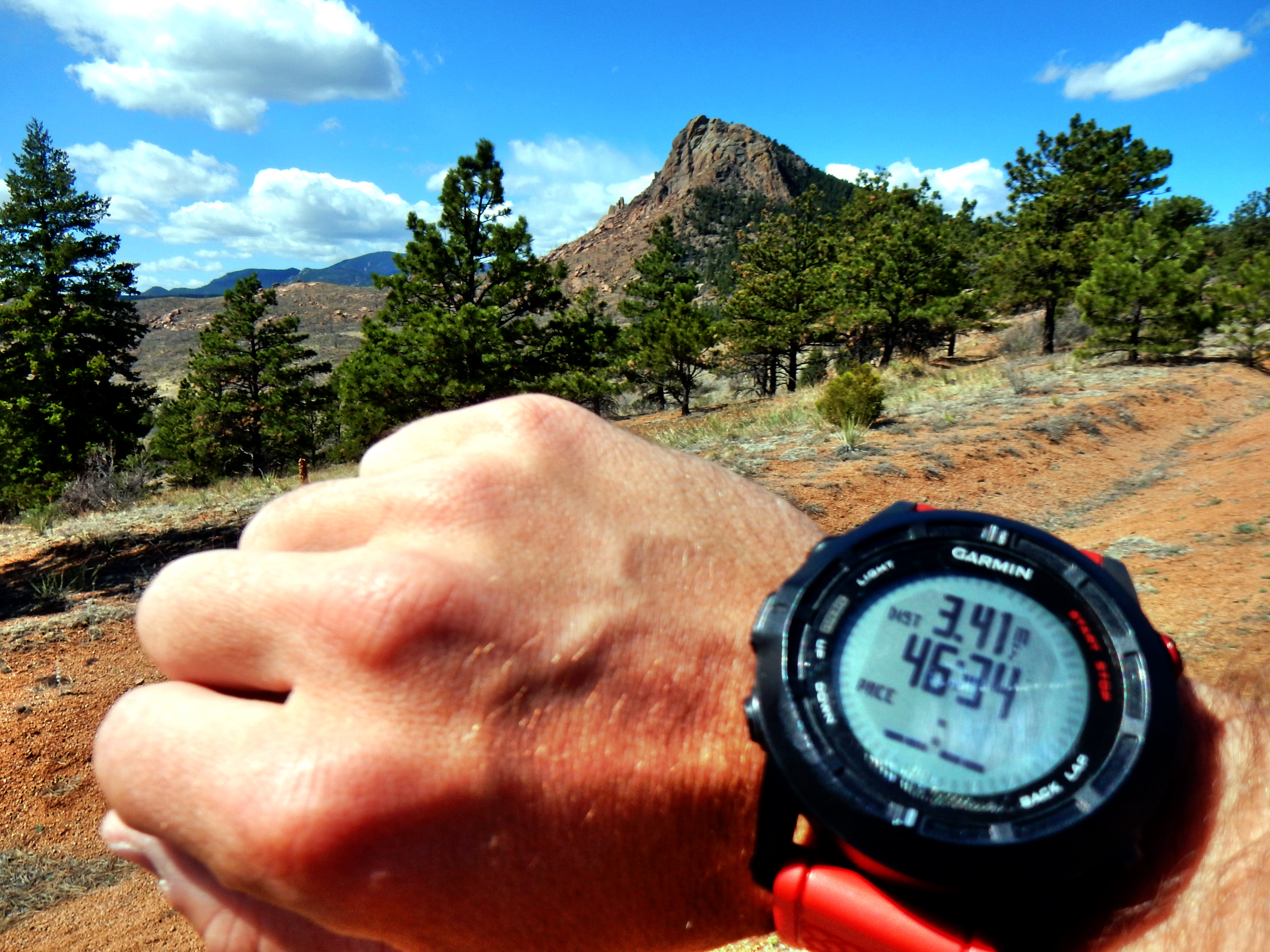 Shortly after joining the road, I found it covered in down timber. After hiking around the first few blockages, I became impatient with the road’s lack of directness with regard to the summit. Since the road wasn’t going to lead to the summit anyway, I decided to head straight for the mountain. The next stretch was fairly obnoxious as it was full of down timber, boulders, and prickly shrubs. My legs accumulated scraps and cuts at a rapid rate, which was more of a nuisance than anything. Given how annoying the traverse across was turning out, I decided to head directly up for the rocks. Unfortunately, the rock faces and boulders required a little bit more courage and had more exposure than I was looking for. So, I continued to weigh my options as I worked my way around the hill.

Option #2 was fairly slow going on the way up, but it was a fun climb for the most part.

Once I got in between the two summits, it was somewhat unclear with point was the highest. Plus, I had a ton of time to play around given the endless blue of the skies. The summits themselves turned out to be far more impressive than they appeared from below. The summit was full of huge boulders and a great variety of rock columns with sizable drop offs. I was somewhat surprised by the difficult and exposure level of the summit, but then again I found very little information on Raleigh Peak, so how surprised could I really be. Anyway, here are my favorite summit shots!

Ok, that’s Raleigh Peak for you! A fun trail run and hike on the Colorado Trail followed by a few rough miles of rock hopping, dead tree snapping, and prickly bush scrapping. I saw that Raleigh Peak Road went down further than I thought from the summit, so I took a more direct route on the way down. The summit of Raleigh Peak is a lot of fun and offers many challenging summit blocks and columns. In fact, I didn’t set foot on what I identified as the highest point. It was really windy and I didn’t want to push it in my relatively unstable trail running shoes. As far as I’m concerned, I summited Raleigh Peak. There wasn’t enough room to stand on the highest point and I reached up above it, so that is good enough for me for the day. In general, I probably would only count it as a true summit if I stepped on the very top. However, I definitely got what I came for (and more), so I’m going to call it a success. If you’d like to strip me of my Raleigh Peak summit; no problem, I had a great day!