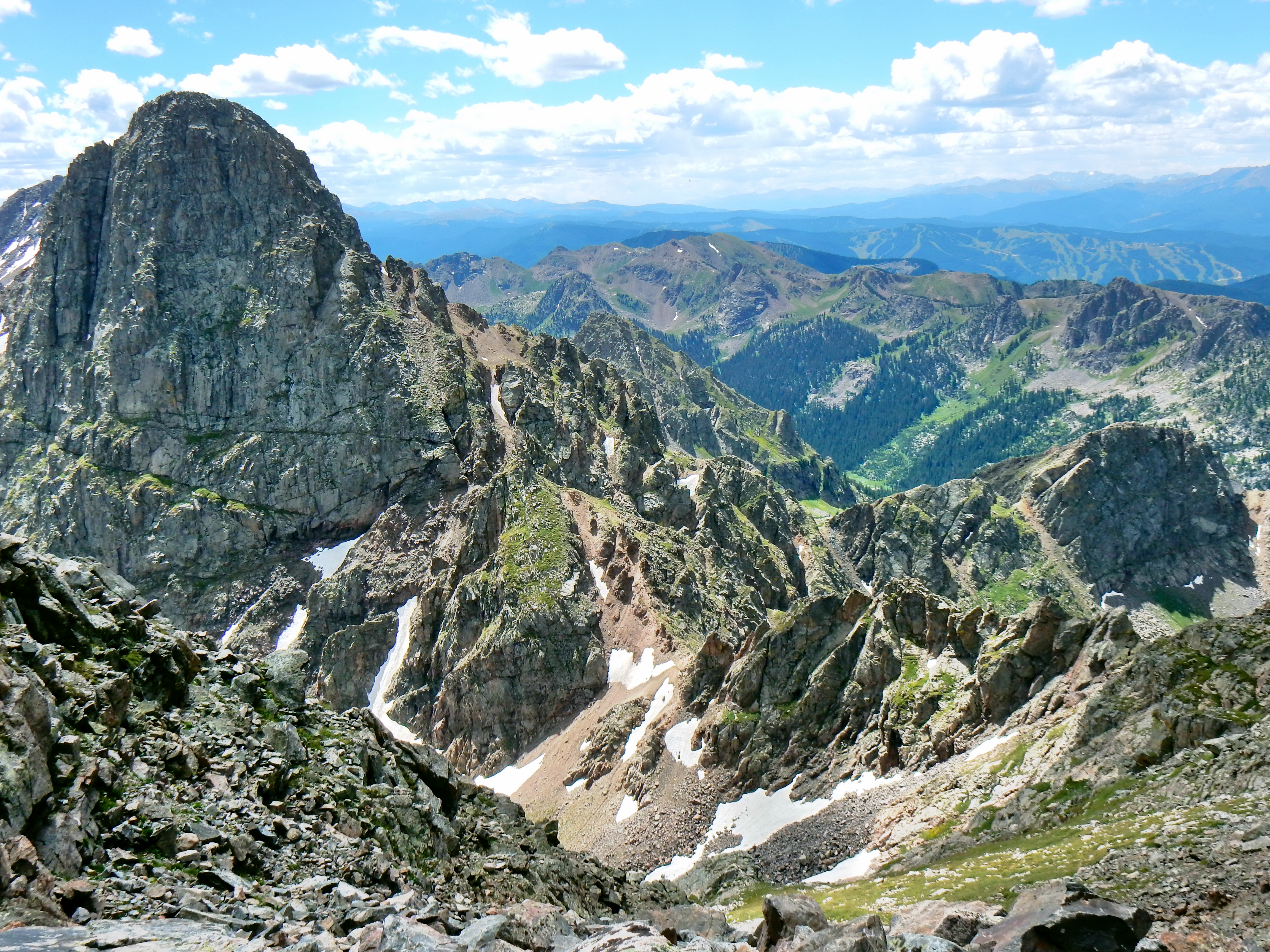 Last Summer I decided I was long overdue for a trip to Colorado’s Gore Range. Beautiful views of the Gore Range can be seen from around Summit County. The most well-known peak in the Gore Range would have to be Buffalo Mountain (12,777’) given its privileged perch over Dillon/Silverthorne and Frisco. Buffalo Mountain is pretty difficult to miss as you cruise through I-70 or enjoy a visit to Lake Dillon (Dillon Reservoir to some).

Buffalo Mountain is at the southern part of the Gore Range, but the range spans some 60 miles so there are no shortage of hiking/climbing options. Let’s follow I-70 and the Gore Range up to Eagle County and to the top of Vail Ski Resort. For years, I have admired the ferocious looking Gore Range while skiing atop Vail each winter. If you’ve ever had lunch or a hot chocolate at Vail’s Two Elk Lodge (at the top of China Bowl), then you’ve almost certainly enjoyed the view of the theatrically rugged Gore Range. If you haven’t been there before, here is a picture from just outside the Two Elk Lodge:

So, our target for the day was the Gore Range! Buffalo Mountain may seem like the obvious choice, but I was in search of something more dramatic for the day. (Fortune cookie wisdom: Drama is a two-edged sword: one addictive, the other afflictive; wield it wisely). As I looked for information on hikes in the Gore Range I found…well, not a whole lot of information. 14ers.com had a few trip reports and there is certainly some material out there, but the lack information speaks to how overlooked the Gore Range generally is.

I found more information on Mount Powell than other peaks in the range and might as well start at the top right? The access to Mount Powell is also a little more straight forward compared to other options. The trail starts out at Piney Lake, which is actually quite close to I-70 just outside of Vail. Piney Lake itself turned out to be a highlight of the day, courtesy of this moose:

The climb up Mount Powell covers almost 5,000ft of vertical and over 10miles, so it is a great test of one’s fitness. In addition, the route is an adventure in numerous respects. First of all, route finding below treeline was a bit of an exploit as we followed several faulty paths or animal trails. We missed a key turn off on the way up, so we ended up doing a little extra credit bushwacking. Not the greatest picture, but here was our cairn to exit. We continued a little further on a slightly better defined trail.

The terrain slopes upward quickly after the turnoff, which will helps wake you up the rest of the way as you’ve likely had an early morning start. Speaking of awakening, I had a rather rude one as we ascended the steep pitch. We were cruising along enjoying the peaceful morning when I was suddenly engulfed by a cloud of hornets or wasps (or, who the hell cares what they were? Get the hell away from me!) I started yelling at my Dad ahead of me to run even though the slope did not support the idea. I panicked up the hill until the bee clouds dispersed.

The only remnants of the ordeal were the 10+ stings that I felt; that and the two wasps that were stuck in my face! I promptly yanked them out of my face and brushed them aside. The texture of bees is sort of strange and it was a bit gross; although, walking around with bees in your face all day is probably a lot less pleasant. My arms and legs both received some treatment from nature’s little acupuncturists, but my face was what really stung (gratuitous pun? Nope, my face throbbed a little bit in the wake of the episode). My Dad and I chatted briefly and we concluded that we must have stepped on the burrowed hive of some species of bee/wasp/hornet. I was pretty pissed off at them for attacking me, but in fairness I may have just trampled their home. Regardless, stabbing someone in the face is no way to behave (I was going to type beeee-have, but that joke is too dumb to put in writing. Feel to insert it if you think it is funny though).

“When you go in search of honey you must expect to be stung by bees.” -Joseph Joubert

We had already hiked about three miles by the time of “the incident”, so turning back or stopping was never an appealing option. My face continues to tingle or hurt slightly for the next hour or so, but the emotional sting was the worst part. There was a brief respite in the upward angle of our path as we emerged from the trees and I should have been frolicking through the field of flowers ala Pollyanna. However, I vigilantly kept my eyes out for any pestilent pollinators; trapped in my prison of paranoia. Fine! I admit to being a little bit melodramatic, but I did so quietly as we continued on our merry way.

The rest of the climb up was rather steep and can be broken down into two main segments: Kneeknocker Saddle and Heart-Knocker Hill. At this point, the best way to have you join us on our hike is with so good ole-fashioned digital Kodachrome (by the way, Kodachrome by Conor Oberst is a pretty good song. Kodachrome is on his album titled One of My Kind, which is his best as far as I’m concerned. Phil’s Song (Learn to Stop Time), Normal, and I Got the Reason #1 are all great songs. Check him out or listen to his group Bright Eyes for some marvelous mellow melodies).

Mt. Powell is a very scenic climb, so I have lots of pictures in this write up. Enjoy!

For the easiest route to the summit, you’ll drop down a little bit off of Kneeknocker Saddle to avoid the jagged ridge line. Here is a look back at the drop off and Peak C!

Well, Mt. Powell turned out to be an incredible introduction to the Gore Range for me. My Dad hadn’t climbed much in the Gores either, so we both really enjoyed it. I was left with a strong desire to explore the Gore range further in the future. Peak C is at the top of my list of targets, but I’ll have to do some research before returning to the area. As I mentioned earlier it might be hard to find information on different routes up Peak C, but that is part of the appeal as well. From everything we saw on the day, I’d assume that summit requires some high class 3 or class 4 climbing. Getting to Kneeknocker Pass was straightforward enough, but the final 1,000ft to the top of Peak C looks anything but straightforward. Until next time, happy trails! (I really need to come up with a better way to sign off…all in due time).

Sorry, no GPS tracks from the day. My watch was having some issues!