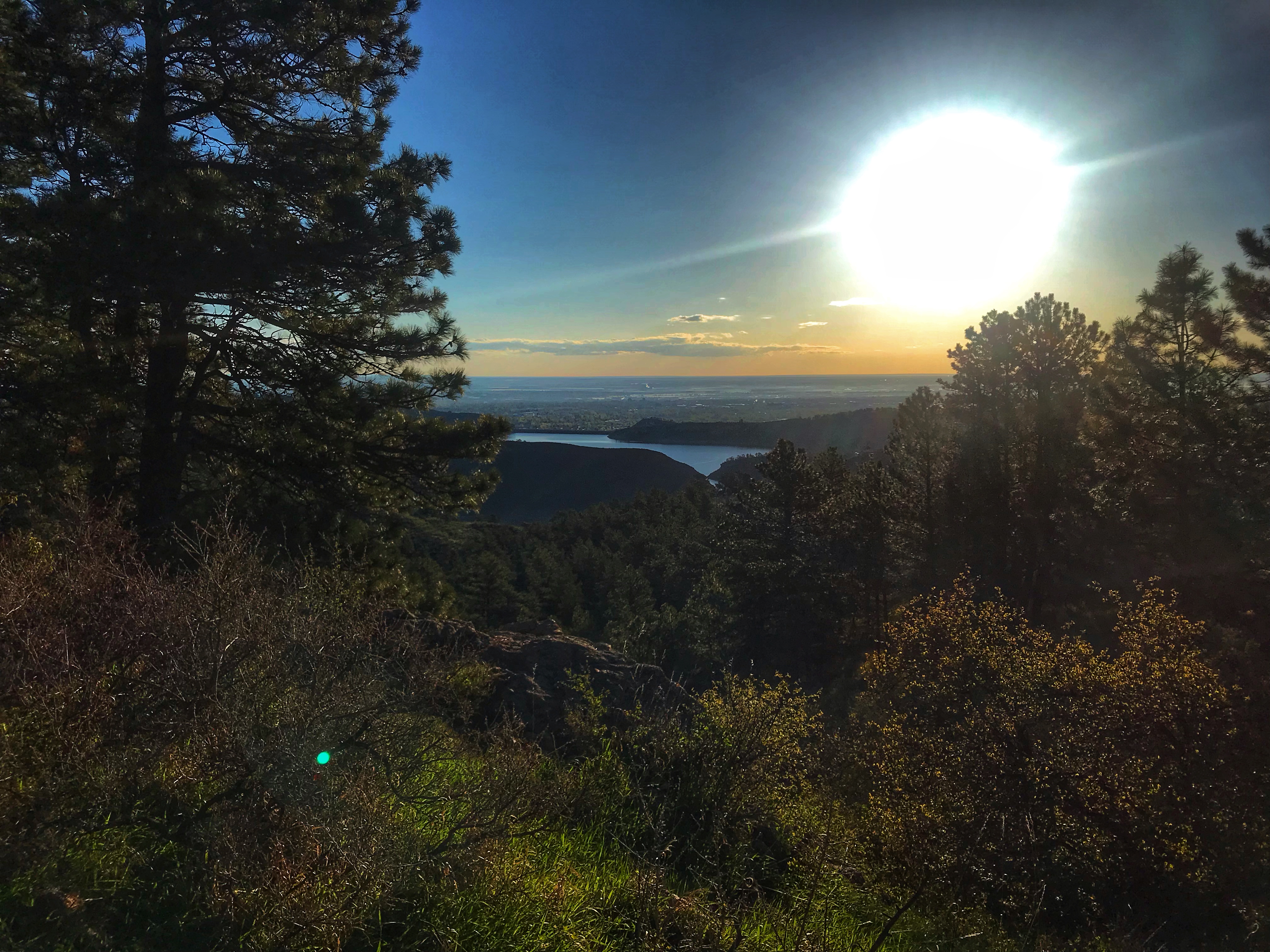 Before I jump into how the race went, let’s talk about the Quad Rock 50 event itself:

It is a beautiful race that starts at Lory State Park just outside of Fort Collins, Colorado. With 11k of vertical elevation gain, this is a damn tough race. Out of almost every aid station, you are confronted with another major climb; the course is relentless. Also, ‘what goes up, must go down!’, so expect to handle some screaming downhills that are relatively technical in places. (For the record, I think the word ‘technical’ is way overused! In this case, I use the word when reflecting on the number of rocks and the sharpness required by the significant grades.

Course highlights include stunning views of Arthur’s Rock, Horsetooth, Horsetooth Reservoir, and Mt. Meeker (13,911’) caked in snow in the distance. This list doesn’t really convey it, but this is a gorgeous course on some awesome trails. Gnar Runners puts on great races, with quality aid stations, course markings, and wonderful volunteers.

Overall, Gnar Runners sets you up for success with their event organization, but then they sure as hell make you earn it that finish! (For perspective, the only Gnar races I’ve done are Never Summer 100k and Quad Rock (25- 2016 & now 50- 2019). Quad Rock 50 is a great event and I highly recommend it if you’re up for the challenge! Right after the race, I was trashed and thinking that I’d never want to run this race again. About a week later now with some context, the race was pretty awesome and I just had a tough day. It may be a while before I return, but I have a suspicion this one will draw me back…maybe for the 25 mile next time 🙂

I didn’t feel super confident going into the race, but I’m used to underestimating myself and doubting myself. In the past, it has often taken me a few hours to get settled into ultras. I sort of just assumed that I’d work my way into the race and I’d figure things out as usual. Well, I never really got comfortable the entire day, so this was a new experience.

I’ve struggled for portions of races before, but I had at least one semi-significant issue at every point of this race. The magnitude of these problems was not incredibly high, but that may have created even more frustration for me. I went into the race a little bit too nonchalant and found myself reeling trying to figure out what was happening. My mind was flooded with negative thoughts and I was angry at myself.

About two miles into the race, a bowling ball of indigestion struck my spirit down. After a couple of easy flatter miles, I tried to be patient and controlled on the next stretch of climbing. I tried, but I failed. My pace was relatively controlled, but my mind was racing intolerantly. A few more people passed by and I was getting pissed off. I realized hours later that I was trying to race the wrong event in my mind. You’ve probably heard the phrase “It’s a marathon, not a sprint”; well, let’s amend that to “It’s an endurance pursuit, not a race.”

I suppose the above perspective shifts for the more elite or competitive ultrarunners among us. While I wish I could rise up into the higher echelons of running; simply put, I’m a mid-pack runner with potential to flux upward on a great day (or, get completely obliberated). I had a similar thought during the race, which I greeted with frustration and disdain. It was just salt in the wound to tell myself I wasn’t a good enough runner to get pissed off at others passing me. I told myself I hadn’t worked hard enough to complain. When I get down on myself, I tend to pile on (like a lot of us).

As I reflect on the last paragraph, it is easy to see the negative rabbit hole I trundled down. When I perform at my best and enjoy these events; the races aren’t about other people. The ‘race’ is firmly about challenging myself and it is all me! At first glance, this may sound incredibly selfish and like I’m disregarding the other runners; however, the exact opposite is true. When I stop comparing myself to others and become more attuned to my own struggles; I’m much more able to connect with others.

The result of this paradigm shift is that I can enjoy the race much more; even when I feel like garbage. Incredible things happen when you allow yourself to celebrate the runners who pass you and commiserate with the mental and physical skirmishes we all have. Plus, you’ll likely leapfrog each other during the race anyway. Call this an uncompetitive or losing mentality if you like, but sometimes you just have to tip your hat to the achievements of others. It is easy to forget the spirit of ultrarunning when you are miserable.

Also, how about maintaining a little bit of perspective too. I’ve made the mistake of allowing putting things in perspective to result in the minimization of my own experiences as a person many times over the years and I continue to work on this. However, it is important to recognize that I have the luxury and privilege to sign up for ultramarathon running events in order to subject myself to pain intentionally. I’m very lucky to choose the pain rather than have it inflicted upon me by the cruelty of the universe as so many others do. Embrace the pain and be better for it!

Of course, this perspective doesn’t change the fact that my body hurt like hell and I felt like flaming garbage laced up in a pair of Altras for much of the race. Look, this race kicked my ass and I wish it went better. I had a lot going on during the race between constant stomach issues, calf and side cramps from dehydration, beatdown hip flexors and hamstring, and so on. The onslaught of different issues created intense aggravation, which progressed to a bit of self-loathing. Could I have trained harder or better? Probably, but the time to dwell on that is never during the race!

I don’t mean to be overdramatic or carried away here, but as a recovering competitive asshole (or perfectionist if you want to tame it down); I feel the need to put this to words. My club soccer team lost the State Championship when I was in high school and I decided to take off a season because I hated the person I had become. I won’t elaborate here, but I knew I was in trouble when our team won a game 3-0 and I’d be irate at myself for screwing up a play that almost resulted in the goal. The victory was secondary to my mistake and carrying that mentality into a difficult defeat destroyed me at the time. I still blame myself for that loss in weak moments some 16 years later. Does that ‘failure’ still motivate me to a degree? I’m somewhat embarrassed to say, Yes.

Oh yeah, I was writing a race report theoretically…at mile 25, I was pissed off that my hamstring tweak wasn’t a little bit worse so I could just quit and go home. At every aid station, all the great volunteers and Elizabeth patiently asked me what I needed and encouraged me. I didn’t want to talk about it and I retreated into my shell. What I needed most was to keep going!

My body bounced between different problems for pretty much the entirety of the final 25 miles as well, but somewhere along the way I became a real ultramarathon runner again. All the darkness that swept over me earlier in the day, softly departed. I never felt comfortable during the race, but I vividly recall a moment with under ten miles to go when I could finally say that none of that bullshit holding me back mattered anymore. It was still there, but it didn’t matter quite so much. In truth, I actually wasn’t even having that bad of a race, I just needed to relearn what ultrarunning is really about.

I’m not saying that being competitive is negative and should be avoided by any means. My point is that you are generally far more successful when you view yourself as the competition rather than comparing yourself to others. Again, if you want to call this a loser mentality, that is your choice and I wish you the best of luck (honestly, I do). However, I challenge you to think if you are challenging yourself enough if that is the case. If you win and succeed at everything you try and do; maybe you’re setting the bar high enough.

Sometimes the way you get to the finish line just makes the eventual conquest that much more meaningful. This wasn’t my toughest day and I haven’t had my hardest test yet; such is life. I hope my next race goes better and I seek to bolster this hope with consistent and meaningful training. I’m leaving a lot unsaid here, but the next time someone asks me why I run these ‘crazy’ or ‘stupid’ races; I might just ask them to read this. (Ironically, I spent the majority of the race pondering what the hell I was doing out there?)

Ultrarunning is often more fable than fairytale. (Yes, the irony that the tortoise and the hare is perhaps the most famous fable is not lost on me; don’t be so literal!)

Special thanks to Elizabeth and Archie for all the much needed morale boosts!