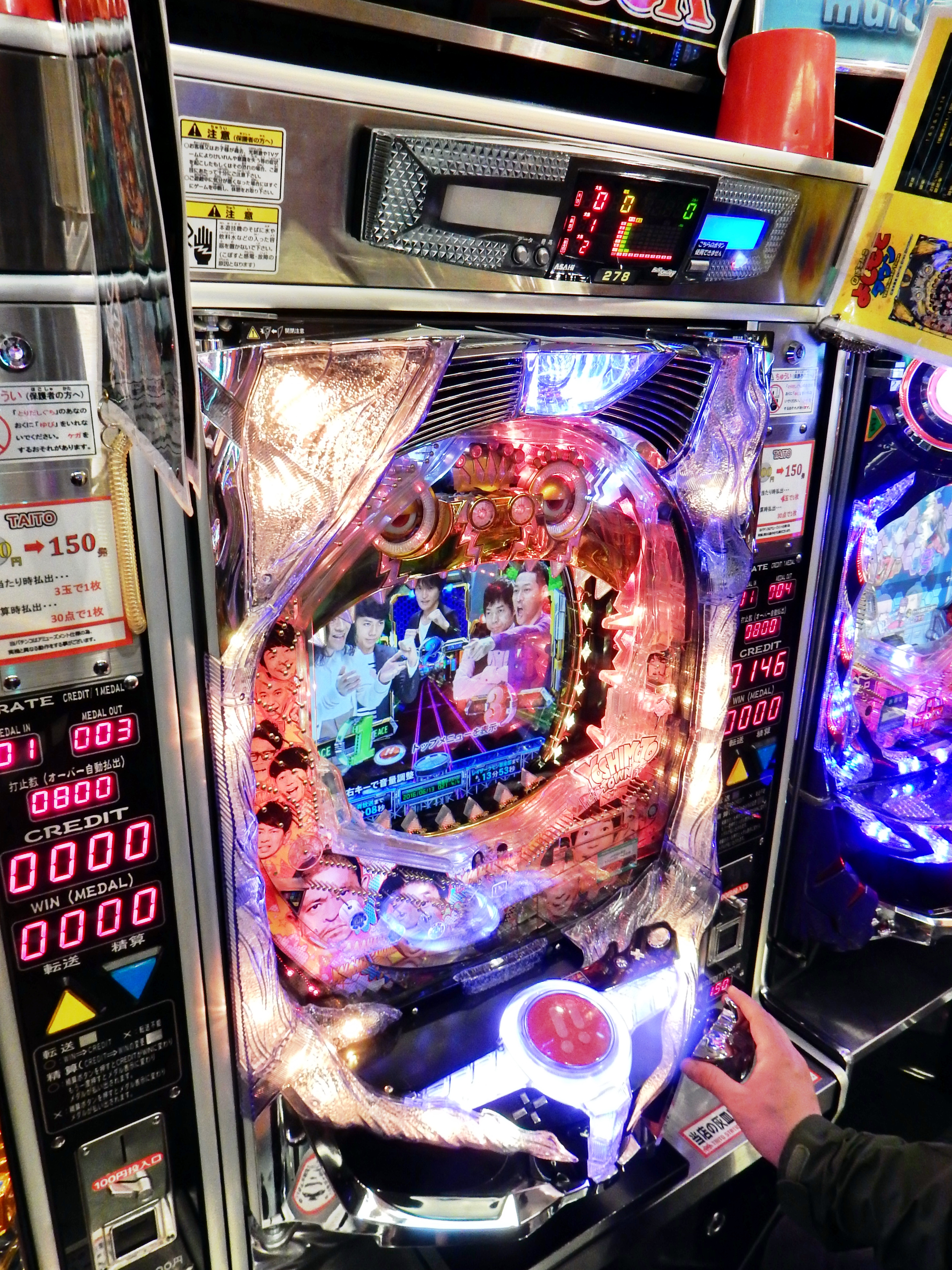 Pachinko is one of the more baffling forms of entertainment I’ve encountered in my life. As we walked around Tokyo, we saw several large pachinko parlors full of machines. After seeing such a wealth of pachinko businesses around Tokyo, we finally decided to see what the big deal was. As we walked inside, we were greeted by row after row of brightly colored lights and a deafening wave of sound. The sound was reminiscent of what you hear when stand directly beneath a large waterfall; only with an artificially electronic twist.

In short, pachinko is sort of a hybrid of a pinball machine, a slot machine, and plinko (from the Price Is Right gameshow). You spin a spring-loaded knob and shoot tiny pinballs into the drop area in hopes that your pinballs will bounce off the pegs into various slots in the field of play. Pachinko sounds really straight-forward, but I was a little bit dumbfounded as I sat there initially.

I spun the wheel and slowly watched the number of pinballs I had dwindle rapidly. Unlike pinball, there are no flippers or additional ways to control the movement of the balls. So, I just flung the balls into the drop zone at a frantic pace and hoped for the best. It was clear that I wasn’t winning, but it also wasn’t clear if it was possible to win. I looked around at some of the parlor’s regulars trying to gather any insight, but I was unable to discern any particular strategy.

After quickly losing half of our $10’s worth of tiny pinballs, we found a nice woman who worked there and asked for help. We didn’t speak Japanese and she didn’t speak English, but we were handed a printout titled ‘the first pachinko’. The only new piece of information was that we could change our bet by using the arrows on the side of the machine. Initially, I was spinning the wheel back and forth, which she seemed to think wasn’t a good idea. So, I held down the knob all the way to the right, which seemed to launch the balls rapid fire style. This rapid fire shooting lit up our screen and generated occasion encouraging sounds, but I soon found my supply of balls to be depleted as well.

Once we were out of balls, we sat at the machine for a minute pressing buttons to see what happened next. My Mom, my Dad, and I discussed if the game was over and what happened next. We appeared to have a score in the corner, so we debated if we could cash out our winnings or what the score meant. We finally called over the friendly pachinko attendant again and little translation was necessary to determine that we lost and our first foray into pachinko had ended. All told, we probably spent about 10-15minutes at the pachinko machine as we watched our ten dollars bounce into nothingness.

As we walked out the door, almost all of the machines were still full of people as the parlor buzzed along. It took a few minutes to regain a sound equilibrium after exit to a natural soundscape. Once we did, we tried to make sense of what just happened. Surely pachinko couldn’t be so popular if everyone was as bad at it as we were. Pachinko would be a crazily expensive hobby if that were the case. I was cracking up afterward about the experience and I made my brother try it out later in the trip. The pachinko venue my brother and I went to appeared to be somewhat lower stakes; or, we could play longer before losing all of our money. Here is a video of some of the action!

When we returned to the hotel that evening, I read through one of our guidebooks to try to learn about pachinko. However, the only piece of information I gathered was that gambling was technically illegal in Japan. One of the examples in our book said that you could only win something like a little stuffed bear at the actual pachinko parlor. You could then walk around the corner or down the alley to another nearby location and “sell” the bear for your winnings. This whole scenario represents a pretty hilarious loophole. Upon learning this, I was really sad that we didn’t win! My back-alley dealings would have to wait.

One thought on “Japan: Pachinko”