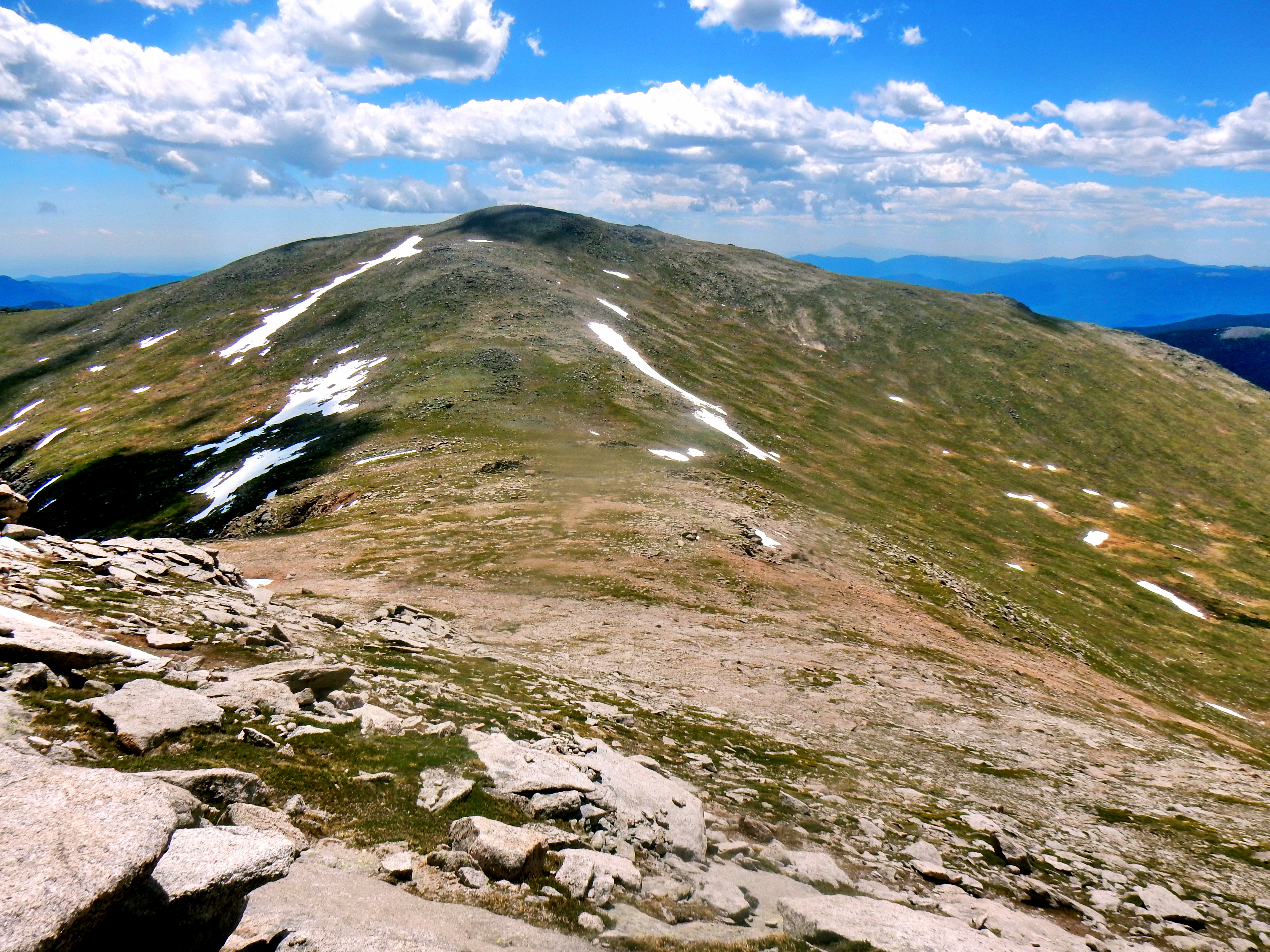 Today didn’t go quite as planned. In fact, our “plan” consisted of getting to the Deer Creek Trailhead and then following a paragraph-long route description I found on 14ers.com. Here is the summary on the route description: Stay right at the 1st trail junction (Tanglewood Trail), Stay right at the 2nd trail junction (Tanglewood Trail), reach the saddle above treeline and summit the mountain to left/West (Rosalie Peak).

Well, we headed into the woods shortly after our first right trail junction and quickly found the trail to be faint or obscured by light down timber. There were a lot of animal trails and after a while everything looked equally likely to be our trail. Perhaps we took a wrong turn on one or maybe we were on the right path all along; however, we stopped to reevaluate our route once we reached a teepee type shelter.

After a brief discussion, we decided that there wasn’t much of a trail to latch onto so we retreated a little bit until we reached a more promising trail we had passed shortly before. I had a topo quad map, but that wasn’t going to be useful since we just started and I didn’t even have the route marked on it. So, we followed the trail until we reached a very prominent trail again. It didn’t feel quite correct, but we took a right to head up the valley. Part of the issue was that we didn’t have any mileage data on when to make our right turns.

Ok, I’ll pick up the pace of this write-up now! We continued up the trail as it became increasingly obvious that we were not on the right route. We did gain anywhere near the anticipated elevation or get anywhere close to the saddle described in our “planned” route. We finally saw a sign up ahead, which I was oddly excited to use to confirm we went the totally wrong way.

So, we found ourselves in a beautiful meadow and about 6 miles into our day as a I recall. We were only slightly above treeline, yet somehow it was the first time we truly acknowledged have far off our original course we were. Meaghan mentioned just wanting to summit something and didn’t really care which mountain at that point. The overall objective of the day was to get in a good day of training for the Run Rabbit Run 100 mile race. Across the meadow we could see the striking backside of Mt. Bierstadt and Mt. Evans finally! I pulled out our “trusty” map and tried to state the case for still reaching Rosalie Peak’s summit.

Meanwhile, I caught a glimpse of a brown mass moving gingerly in the bushes on the other side of the meadow; interrupting our regularly scheduled program. A full investigation was launched…

Well, as you can likely tell from the full-size picture above; it wasn’t a black bear. We confirmed this as the animal turned its head to the side and clearly identified itself as a moose. As we walked closer, we joked that we may have to downgrade it again to a horse (we were feeling foolish for calling it a bear earlier).

We just caught a glimpse of a baby moose as the moose shunned our photo attempts. Once we determined a baby was involved, we decided that we were probably already too close for comfort. So, we retreated back to our mid-meadow trail. I continued trying to convince Meaghan and myself that the trek over to Rosalie Peak was really just a simple ridge climb of a few miles. I tried to justify that had to head several miles back down the valley anyway, so we might as well climb another few thousand feet and bag some summits along the way! Despite our better judgment, we decided to continue toward Rosalie Peak!

Needless to say, this turned into a much bigger ordeal than expected. However, it was also an incredibly rewarding decision as we reached a really unique vantage point from which to gaze upon Mt. Bierstadt and Mt. Evans!

If you haven’t gathered by now, our route is not necessarily the most direct route to follow; however, I’ll talk you through a little bit more. We followed the path of least resistance to reach the saddle between Epaulet Mountain (13,523′) and “Epaulie” (13,530′). I ran over to summit Epaulet Mtn. even though it isn’t technically a ranked summit. The top of Epaulet provided a front row seat to the parade of vehicles up the road to Mt. Evans (ok, it wasn’t a super busy day, but it can be some days). The ridge back over to “Epaulie” was really tame and more quality views awaited us there; including a look over at Rosalie Peak! We were getting a little bit tired and didn’t really bring enough water, but at that point there was really no debate about heading back the long way we had just came. So, we crashed down the hill and then back up to the summit Rosalie Peak.

Now back to some pictures:

Well, we knew we had a long way back down from Rosalie Peak so we got start pretty quickly. We expected to find a little bit more of a semblance of a trail on the way back down, but no such luck. However, we were incredibly lucky to slice across the slope right next to this guy! 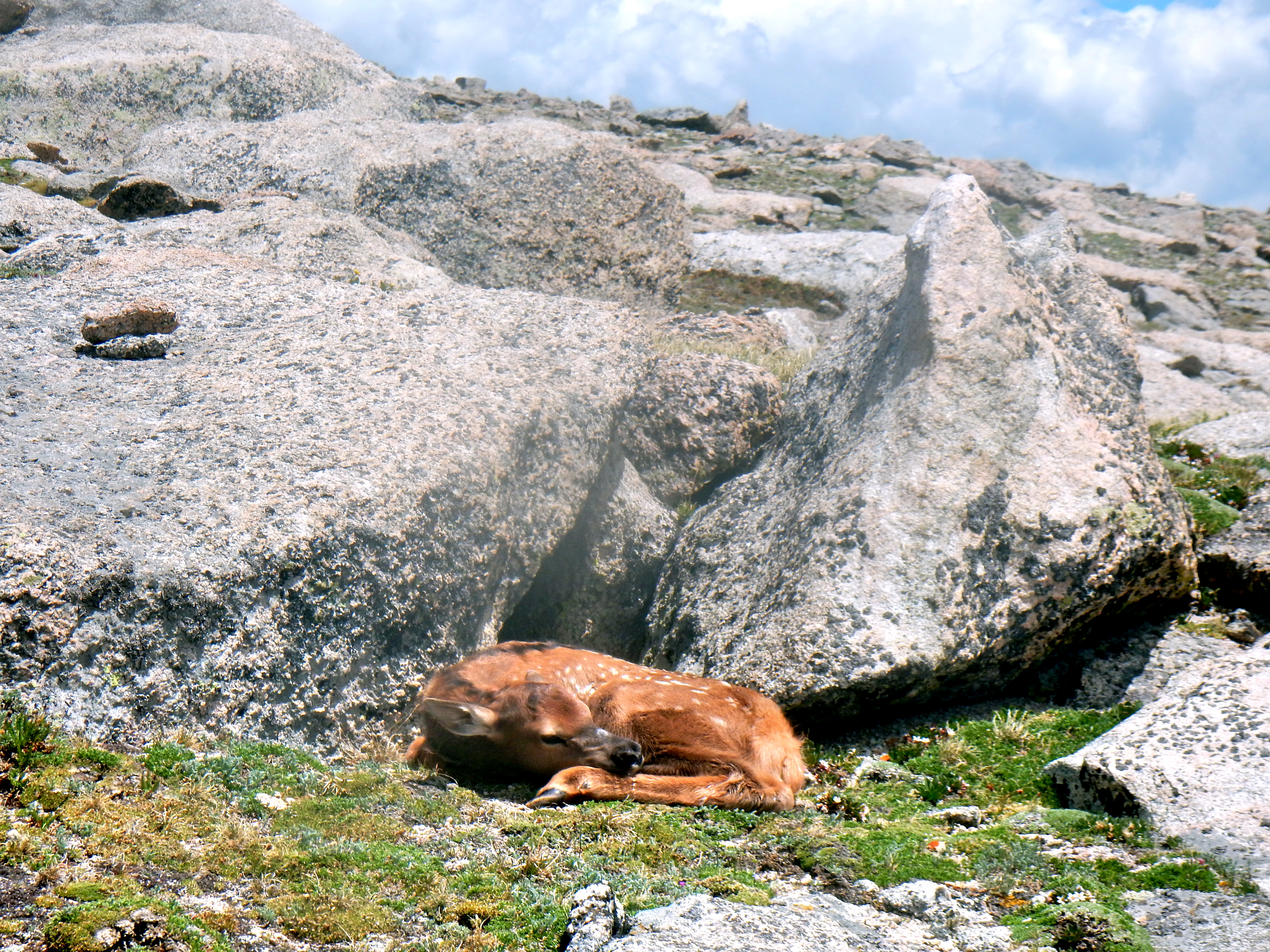 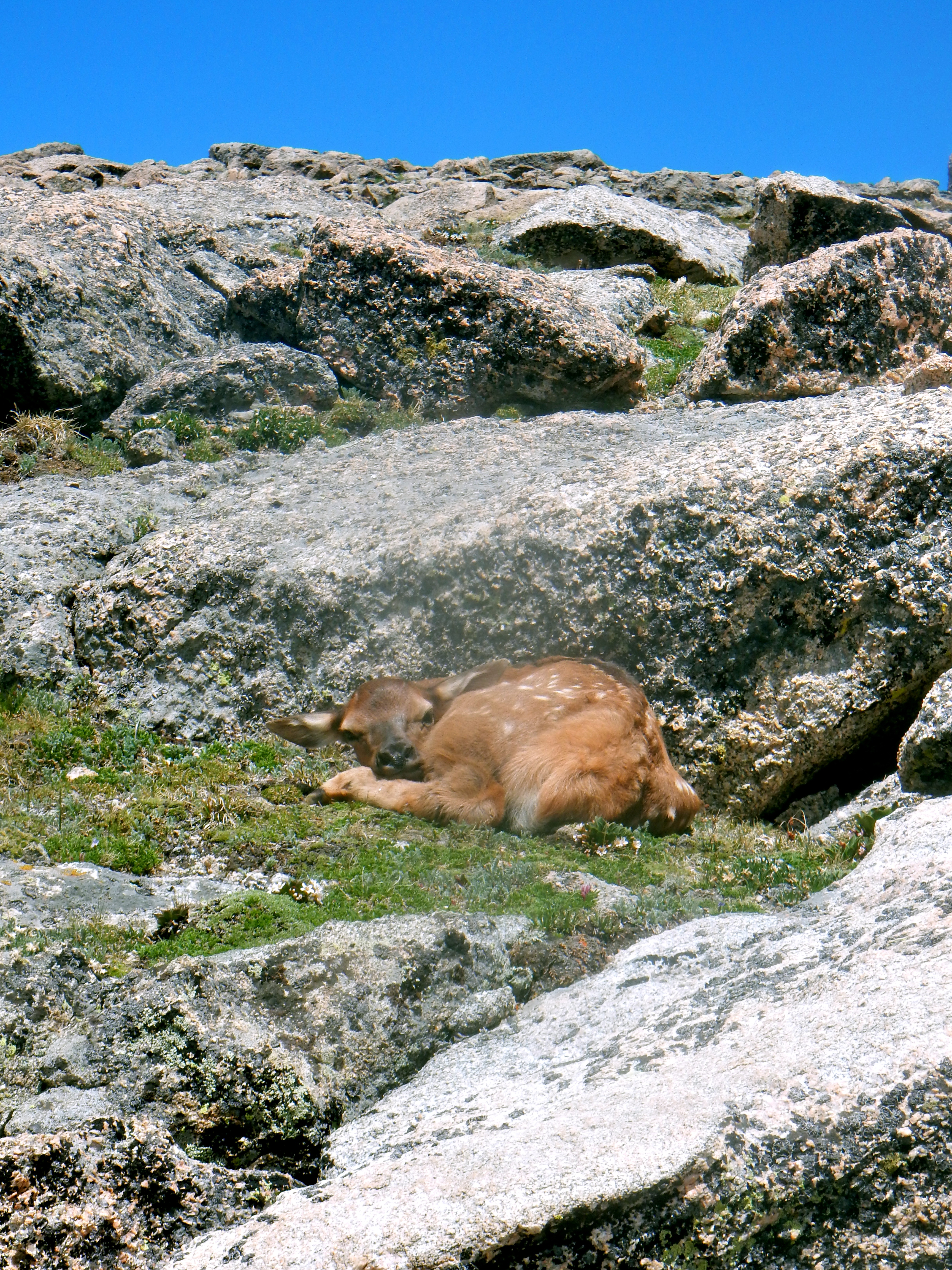 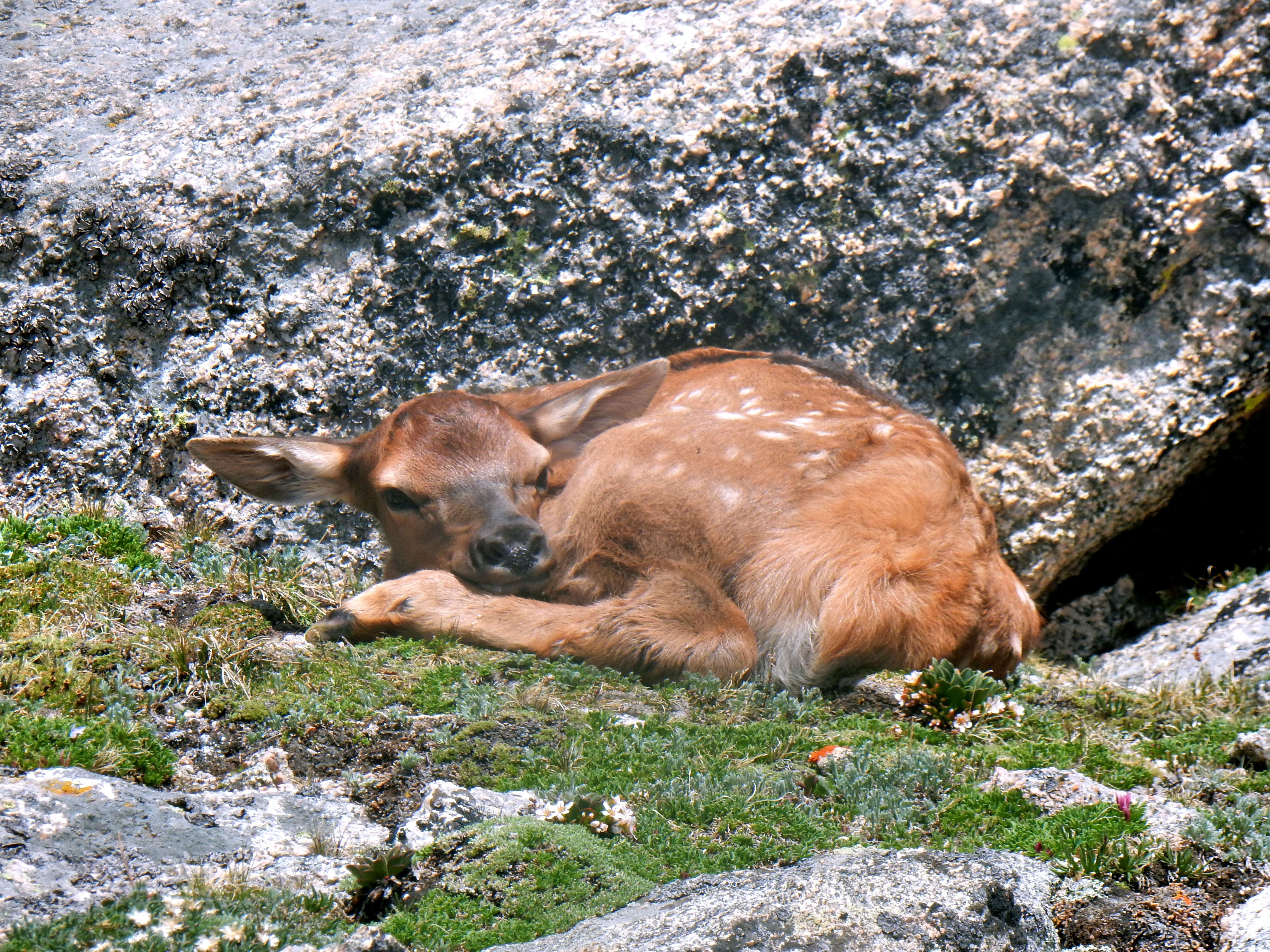 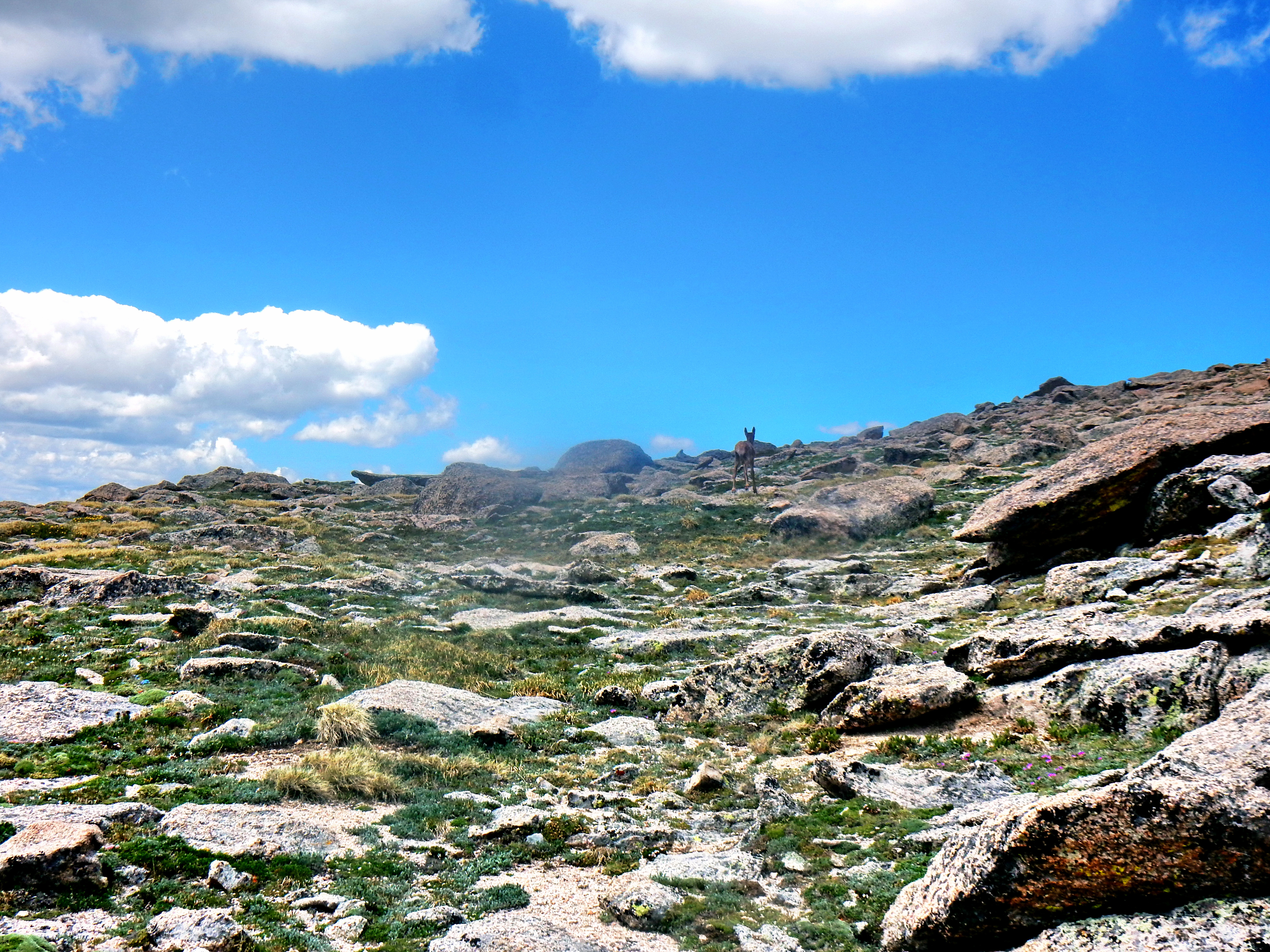 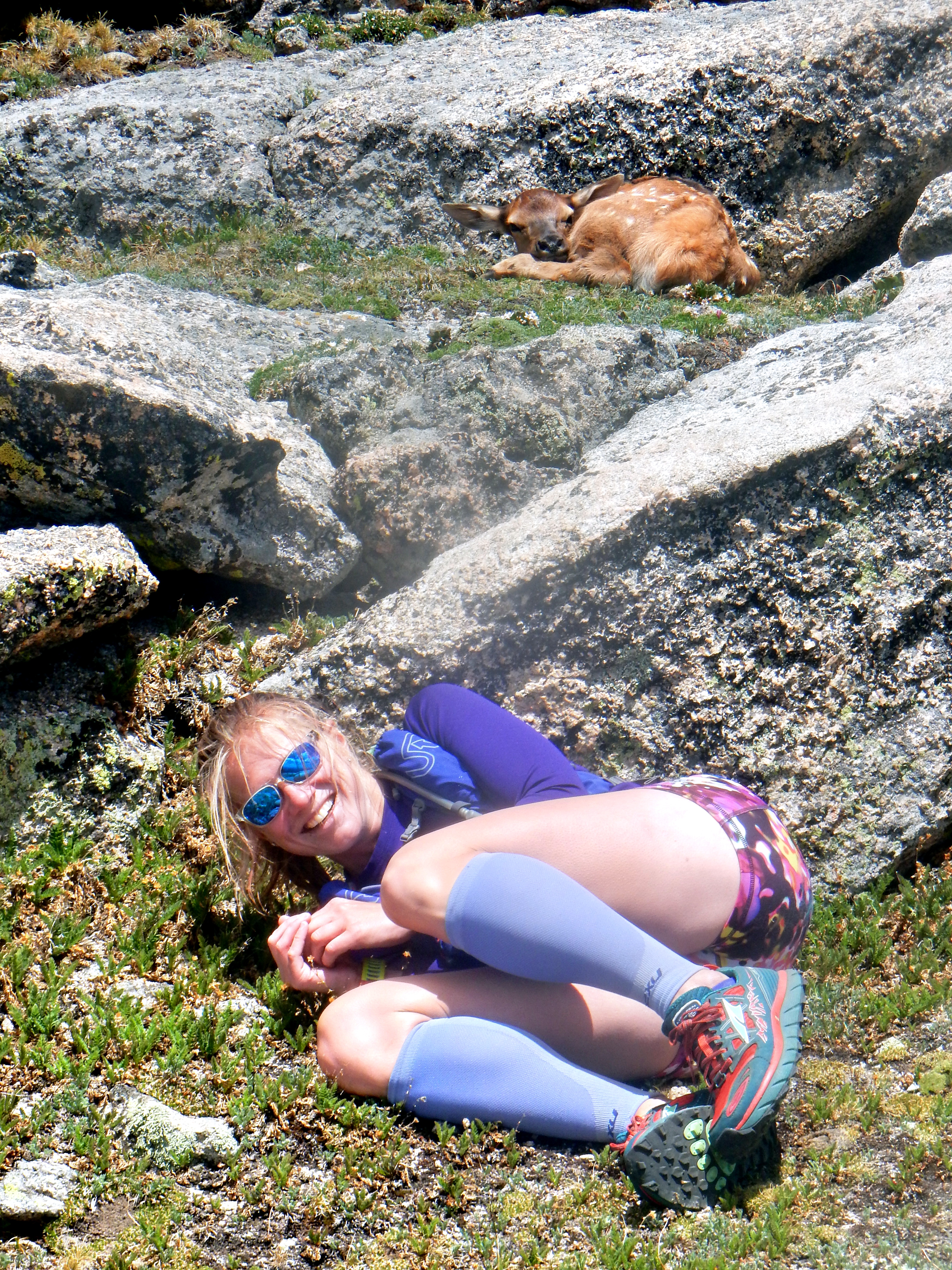 Well, the trip back down was a long one and we never really found a trail until we got down to the creek much lower. There was a brief snowfield crossing and a lot of bushwacking back down the valley, but we ended up back at the car eventually. Two Top-200 Colorado summits, Two moose, One baby elk, and a great training day in the books!

Not the best route to follow probably, but here are our GPS tracks…