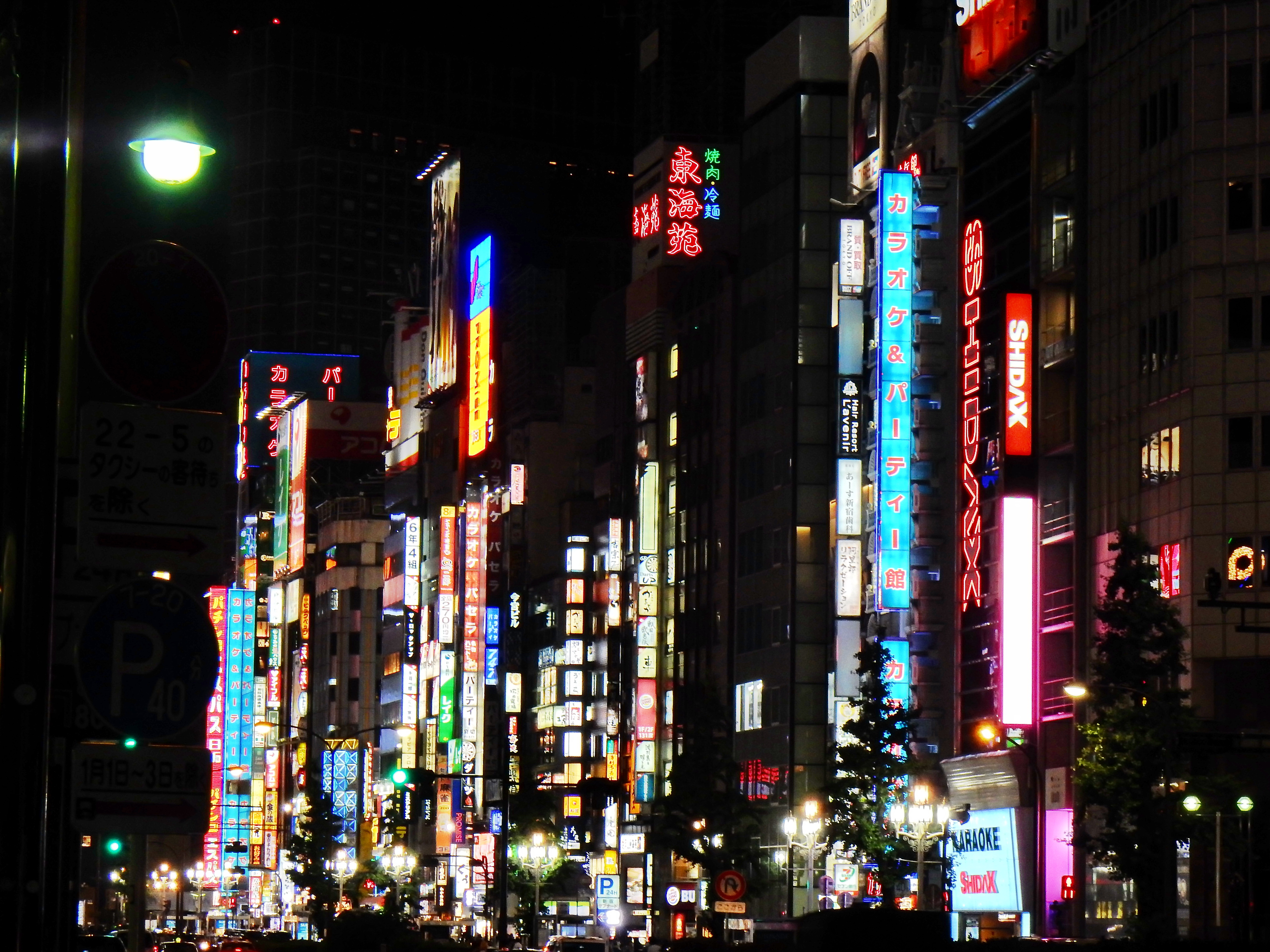 One of my favorite neighborhoods we visited in Tokyo was Shinjuku. Shinjuku’s bright neon lights at nighttime are a spectacle themselves. There are certainly a lot of shops, restaurants, and bars to visit in Shinjuku, but just being there gives one a lot to enjoy. The movie Lost in Translation with Bill Murray and Scarlett Johansson takes place in Shinjuku primarily, so that may help you calibrate to the area. Lost in Translation is a good movie, but don’t worry if you haven’t seen it; I think the following pictures and descriptions will give you a little flavor for the area.

Speaking of Lost in Translation, our first stop in Shinjuku was visiting the New York Bar at the top of the Park Hyatt Hotel. The bar offers stunning views and had great live jazz music as well. Unfortunately, the stunning views did not include Scarlett Johansson, but we still had a good time without her. The cover charge and drink prices are a little bit outputting, but the views and music were well worth the visit. The views from the bar are more of Tokyo at large instead of Shinjuku specifically.

For views of Shinjuku specifically, we headed down to the streets. It was a surprisingly long walk for us to the bright lights of Shinjuku as we had to go around the entire train station; which just so happens to be the largest in the world (or at least one of the largest). Anyway, seeing Shinjuku at night was a really cool experience. We had already eaten dinner and had a few drinks at the bar, so we didn’t stop off in many places. As we frequently found to be the case in Tokyo; just walking around was very entertaining. There are certainly many sights worth visiting in Tokyo, but it is such a unique place and so different from my American perspective that there never seemed to be a shortage of things to be fascinated by. Here are some of my best pictures from our night wandering the streets of Shinjuku:

I enjoyed Shinjuku so much that I decided to go back again later in our trip with my brother (he was at a conference and missed the first go around). Seeing Shinjuku during the daytime was a little different experience to be sure. It was still pretty lively, but something about the bright lights really brings a city to life. Regardless, Shinjuku remained full of character in daylight as well. My brother and I also visited a Shinto temple (Hanazono Shrine) which was tucked just behind the hustle and bustle of Shinjuku. Hanazono Shrine was originally built in the 17th century, so it was an odd juxtaposition with Shinjuku’s ultra-modern surroundings.

Another sight I made sure to check out was the Golden Gai area of Shinjuku. My parents and I weren’t super prepared and were unsuccessful in finding it the night before. Once my brother and I found it; it was easy to figure out how we had missed it the night before. Golden Gai is a very compact network of just a few alleys and is tucked away just off the main streets. I first learned about Golden Gai from watching Anthony Bourdain’s Parts Unknown. Golden Gai is full of tons of small bars and restaurants and is a good representation of an older Tokyo. The rest of Shinjuku is very modern and polished, so Golden Gai is unique from that perspective as well.

One of the things that stood out to me from Anthony Bourdain’s special was that some of the restaurants only had five to six seats as well. In fact, some of them even operate as members-only establishments as well. The way it was explained was that you could only go certain places if you had a friend with a connection would could introduce you. I admittedly don’t understand the intricacies of how it works, however, there are many bars which welcome foreigners/tourists as well. Anthony Bourdain visited Golden Gai at night and it was jammed packed with people and had a crazy and claustrophobic atmosphere in the narrow alleys. However, we were there mid-afternoon so it was deserted and calm. On the plus side, the calm permitted us to take pictures as well.