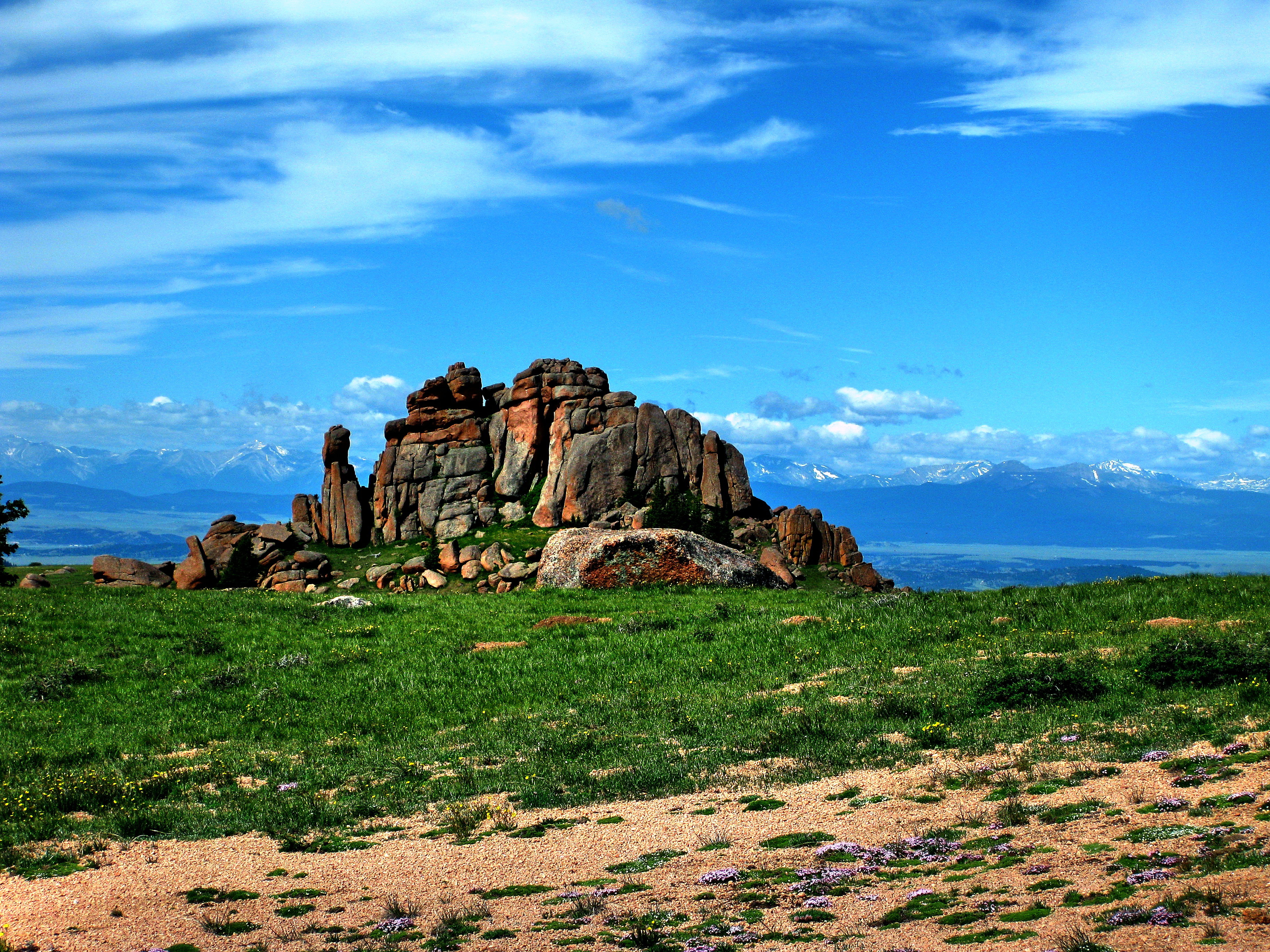 Bison Peak is a hidden gem. I’ve climbed it twice now and seen about two other hikers total. It is a little bit off the beaten path in the aptly named Lost Creek Wilderness. I think the Lost Creek name refers to the river literally disappearing underneath the rocks and ground in some parts, but the word ‘lost’ really stands out to me when I think of the area. In fact, I became terribly lost in the area late last Summer (I will post about that experience shortly). Reaching Bison Peak itself from the approach I will be describing is far more straightforward however.

We started from the Ute Creek Trailhead near Tarryall Reservoir, which is about a two-hour drive from Denver. The route starts out gradually and gains elevation at a fairly consistent rate until you reach the day’s key turn-off point. Around the turn-off point you start to see a few interesting rock formations up the hill. Not impressed by these rock formations?; don’t worry these first glimpses are only the tip of the iceberg. The turn-off is about four miles into the hike and is well-marked with a sign for the Brookside-McCurdy Trail. Simply turn right (to the east) and follow the trail up the ridge as you climb to the high meadow, where titanic surprises may sink your jaw.

I referred to the area directly after you gain the ridge as a meadow, but it is perhaps better described as a flat field of rock gardens. If you want to head directly for the summit, you basically make your way across the long field and then head toward the highest point. I don’t recall seeing any cairns, so the route to the summit is sort of a matter of choose your own adventure. There are many gaps, channels, and overhangs to slither through and duck under, so don’t be too concerned with how you get to that cheese at the end of the maze. The height and masses of rocks are considerable in scale, but the path to the summit doesn’t require any technical hiking at all. You will likely feel more comfortable using your hands on occasion, but even that is not necessary. A slight backtrack here and there may present an easier route to the top. In general, I’d say that the easiest way up is to head between some of the rock towers and work your way up from the back, but just have fun with it!

Upon reaching the summit, one is presented with a quality overlook on the Lost Creek Wilderness. You are also given a tremendous vantage point to admire the diverse fortress you’ve just penetrated. My Dad and I hiked all the 14ers together and we have visited a wealth of Colorado mountains, but we both agreed this was an astonishing new spectacle. Part of what makes these constructions so noteworthy is the fact that they are located so far above treeline with the summit reaching 12,431’. One can’t help but be profoundly impressed by the geological forces that must have interacted to create such a crazy looking place. If you’re a geology nerd, eat your heart out. If you’re not, well just enjoy the remarkable sights.

Well, I think it is probably best to serve up some pictures for you at this point rather than attempt to describe the uniqueness of the area. Better yet, go check out Bison Peak for yourself! The first time I hiked Bison Peak I knew almost nothing about what to expect, which may have made the journey that much more interesting. So, I almost feel guilty about posting these pictures and potentially ruining the surprise. However, I was almost equally amazed when I revisited Bison Peak a few years later on a snowshoe/hike, so I don’t think this will spoil your trip.